Thank you for your support in buying this calendar featuring the colourful teams who took part in our successful Pink Ribbon Race in 2013.

This summer, the Breast Care Unit at Prince Philip celebrated its third anniversary and we are glad that we can continue to contribute to its success story and support the efforts of Mr Holt. In 2013 we donated £10,000to Prince Philip and a further £5000 to local needs and charities and we hope to emulate these amounts in 2014.

The annual Ribbon Race continues to be the focal point of our fundraising as well as providing a day of outstanding enjoyment. As usual , the local pubs donated generously and Ammanford RFC for provided a splendid table for the hungry runners but again I must acknowledge the contribution of my colleagues at the Testing Station who were responsible in collecting £2500  further money was raised by manning stalls at The party on The Pitch in Tycroes and Betws in Need Charity event.

In addition to the proceeds of the Ribbon Race , we would like to hightlight the outstanding contributions from the anonymous operator who has donated £1000.this year again & for the support from Castell Howell, Brecon Carreg & Ty Nant Water.  Thanks also to Debbie of Carmel who raised £750 from  afternoon Teas  events and to the family of the late Alison Jones for £525 following her untimely death.  The Betws in Need boys also made a £1000. donation as a result of riding 400miles in 4 days in 4 continental countries and its through efforts like this and the support of a generous public that we have been able to raise more than £145,000 over the past nine years.

Thanks also to Alison Llewelyn for updating our web site each year and a big thank you to Roland Danter for Ribbon Race pics the Auction evening pics and the Presentation evening pics . Thanks also to Lyn of shoppers World for providing us with the pink balloons each year , the traders in Ammanford who support our efforts , the Mounting Gate for the venue and finally to Hywel Thomas our jovial compere and auctioneer.

On a sadder note we extend our condolences to Lorraine Lewis (Dawns mum) on the loss of her son Kevin.  Lorraine has been an outstanding supporter of our charity from its inception and we share her sad loss.  Our thoughts are also with Amanda Worth who is undergoing another round of chemotherapy and we wish her well in 2014

On June 6 Dawn Robinson and I visited Buckingham Palace where I was awarded a British Empire Medal, which proved to be a memorable occasion when we mingled with many celebrities. 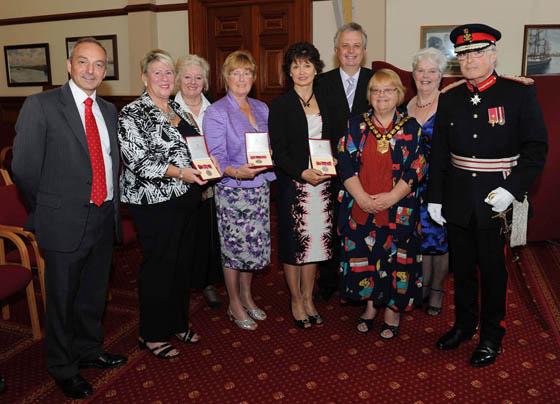 The supporters group is still ongoing and we meet on the last Wednesday of the month at Penybanc RFC.  All are welcome

In conclusion,  next year will be our Tenth Anniversary and I hope that you will continue to support us in what might be my final year.

…together we can help to find a cure